8 Tips to Make Your Podcast Stand Out

What kind of advice would you give to make a podcast stand out from the clutter?

1. Start With Your Goals

You have to ask what your goals are.

Is your goal to hit the masses and be in the earbuds of millions of people every day like Joe Rogan?

Or is your goal is to keep a consistent base of 100 loyal listeners every single episode?

And honestly it is just chances.

It’s just percentages of chance of your show becoming the next appealing to the masses, Joe Rogan style or using the podcast as a marketing tool or niche tool to whatever kind of startup or aspirations whatever it may be to use as another thing that you are now giving to your specific niche audience.

This is much more attainable.

Think of it like someone moving to LA to become an actor.

Like, sure, they may not be as big as Robert de Niro. But you look at an actress like Lois Smith, who’s been on and off Broadway for 50, 60 years at this point and has been in major motion pictures.

Even though most people don’t actually knows who Lois Smith is, she’s made an entire living as an actress since she was a young girl, and is one of the most respected actors in Hollywood and New York, like everywhere. It’s not like she’s some nobody. She’s made plenty of money, and had a great life.

You don’t always need to be all or nothing. It’s not like you’re either a huge name celebrity or you’re nothing. You don’t have to be Robert De Niro to have done a good job. Being more like Lois Smith would be an excellent ambition.

That’s why it’s so important to discover what your niche is, who your audience is, and what you bring to them.  Serving those hundred people is much more attainable than just appealing to the masses.

2. Engage With Your Audience

Using the early days of of My Favorite Murder as an example; they worked their way up to developing a loyal small fan base. Imagine less than a hundred people listening to each episode.

But the hosts were very smart, and offered their listeners an experience that other podcasts weren’t. They offered them a fan club. They included them in the making of the show. They offered listeners call-outs in the show, or offered to read their tweets to make them feel invested and engaged.

Advice: If you have even 10 people listening to your show, reach out to them on the podcast and say, “Hey, engage with us somehow – either in a Facebook group, or in a tweet or a podcast review. Leave a review and talk to me, start a conversation and I’ll give you a mention on the show.”

Even something as small as that can add such an engaging touch to your audience. It shows the listener that other people are also fans of this show, and you’ve got something in common with someone else. It reminds them that if they ever had a question, or wanted to get a shout out, they could do the same.

The human brain loves to hear its own name called out, and it helps people to feel a connection with you. Then the likelihood of them telling their friends, or engaging with you in other ways drastically increases. It starts a powerful psychological snowball effect, which results in more fans and more listenership.

It is your public persona, your business, and your reputation all in one.

A good podcast production expert will educate you how to use your podcast as part of a marketing or engagement tool that helps you engage with your clients or future customers. Your podcast is what people will know of you, and what you put out there will have either positive or negative consequences to how you are perceived.

Determine if your goal is “appeal to as many people as possible” or “help a small number of people, and let everything grow organically.” Use your podcast to help drive both engagement and revenue.

Once you get your podcast production process streamlined, and your listenership is becoming more clear, you can start to think about a blog or a YouTube channel, but it is good advice to only stick with one at a time, adding the next thing once the first gets taken care of.

It’s helpful to think of your public-facing persona as a triangle.

The podcast can be one point on that triangle, and then the blog and the youtube channel, etc. Each thing needs to point to the other, which then points to the other. No matter how a customer finds you, they can engage with you on the other channel and share your work or be discovered on various platforms.

As long as you’re just engaging on all three of those levels and each thing leads to the next, then you’re in a good position to monetize and find success.

Remember that most importantly, you need to stay consistent.

If you find your consistency begins to lack, then pull back your approach until you get your consistency back on track. If your fans are expecting one episode a week, and suddenly you skip a week without notice, you’ll lose a significant amount of your followers and have to work extra hard to build it back up after you’ve lost people’s trust.

5. Research Your Guests Before Your Interview

Within podcast production, you have to remember that people doing “the interview circuit” get asked a lot of the same questions over and over again, and have told the same stories repeatedly.

You’ll not only build better rapport with them if you keep it interesting for them, but by asking better questions, you’ll inevitably have better conversations and will create a more interesting final product.

How can you do that? Research your guest beforehand. Google their name. Read a few of their blogs. Listen to the content they’ve put out on other podcasts already.

It’s okay to ask some of the same questions, if you think it’ll help your audience to become familiar with who they’re listening to, but it’s worth spending that extra hour of your time becoming familiar with their work, so that you can come up with more engaging questions and thoughtful topic points to bring up.

A good podcast producer will research your guests for you, and prep the host on who each person is, what they have done throughout their career, and other talking points they’ve brought up publicly before.

As a host, you definitely need to know some information about your guests. You can’t go into having an interview with somebody with zero knowledge of what the conversation might be like.

For the guest, it’s considered pretty insulting to have somebody come in, take some time out of their day to come talk to you.

6. Give a Memorable Podcast Interview

Remember, as the podcast host, your job is to highlight your guest’s knowledge, and allow them to present themselves in the best possible light.

In order to do that, you need to be able to drive the conversation in a way that makes that possible. With your research in tow, you should be brainstorming things your audience might want to learn more from this person’s perspective.

They’re the expert on the subject, but you definitely need to know and respect why they’re on your show in the first place.

For example, start by asking general questions about what they do and why they’re there, and then ask them for next-level stories and examples of what they bring up. If you found something interesting in your research, ask for their story on what that was.

Before moving on to another subject, it’s always good practice to ask, “is there anything else you want to add?”

7. Use Podcast Production Schedules to Map Out Your Next 10 Episodes

If there’s one thing most podcast producers in general agree on, it’s the importance of planning ahead to keep workflow on schedule to deliver a show routinely on time (and with as little stress as possible)

Much like a season on a TV series, a podcast can be planned 8-10 episodes in advance, and even if your show doesn’t follow the “season” approach (it can!), it’s incredibly useful to keep a rigid production schedule as follows

If you try to think about your next 10 episodes ahead, and keep in mind the amount of work that goes into every episode, you will be able to plan a realistic deadline for each step and work backwards.

Even if your show is ongoing (weekly, biweekly, etc), it helps to reframe your mind to come up with a good plan to come up with an idea of what each episode might be about (even if it’s bullet points for what each).

The theme of each episode or who your guest is on each episode, an idea of who these people are going to be on your show, what they’re about will help you lump your ideas together in a cohesive way, so that your audience will benefit from having a similar ongoing conversation each time they listen to you, and it doesn’t feel like there’s just some wild and new topic each week.

Doing this subtly adds to the User Experience, and that might be a driving reason why some people choose to stay with you versus giving their attention elsewhere.

In short, thinking ahead makes you look more polished and professional to your audience, but also helps you to get the work done and meet your deadlines.

The more rigid you can keep to your game plan, the more smoothly everything is going to go, and the more success you’ll find.

8. Keep Your Guest On Topic

What is naturally going to happen, if you don’t take responsibility for keeping your conversation flowing in a logical manner…is that the conversation will go somewhere way off the rails, and be less productive than it could have been.

It’s the host’s job to keep the conversation moving. If your guest gives a short answer, ask them to elaborate on something “for the audience to get a better understanding of their thinking on that.”

For example, what if you were interviewing a podcast production professional, and you asked them “And what’s the podcast equipment that you need?” and they just respond  “laptop”.

Why should somebody hire you to produce their show?  “Because I do sound.”

As a listener, that would make for a boring experience. It’s up to the host in these instances to get more out of their interviewee than that. Remember the goal of the episode that you planned out, discuss the bullet points you wanted to hit, and keep your audience’s needs in mind throughout and you should be on a path to do a great, memorable interview. 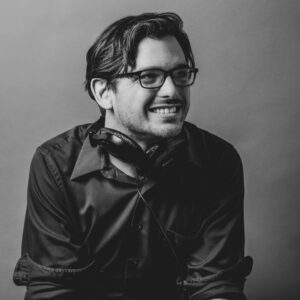 Anthony Luciani is a podcast producer and sound designer who has produced or edited successful podcasts such as Business Casual, My Favorite Murder, 51 First Dates, and TV Camp Fire.